Uniting Musical Artistry
with Social Impact
for over a Decade... 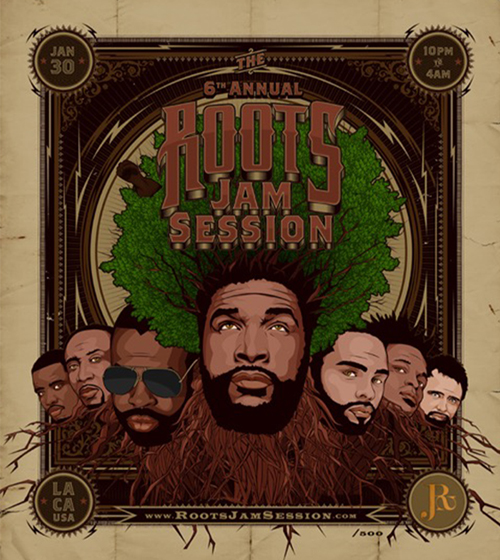 Long before they became a household name on The Tonight Show with Jimmy Fallon, THE ROOTS (often referred to as the hardest-working group in show business) struggled for recognition outside of the hip hop community. Most were unaware of their incredible talent and rare ability to spontaneously jam with any artist from any genre at a moment's notice.

At the same time, KELDOF Founder Kevin Seldon had spent years turning down offers to produce vanity-fueled initiatives during award season and was searching for a platform to transform all of that self-congratulatory stuffiness into a meaningful experience.

When Keldof was introduced to the Grammy Award-winning musical group, their brainstorm session beget the question: Was there was a way to celebrate The Roots musical genius while also leveraging award season to make a positive impact on the world? 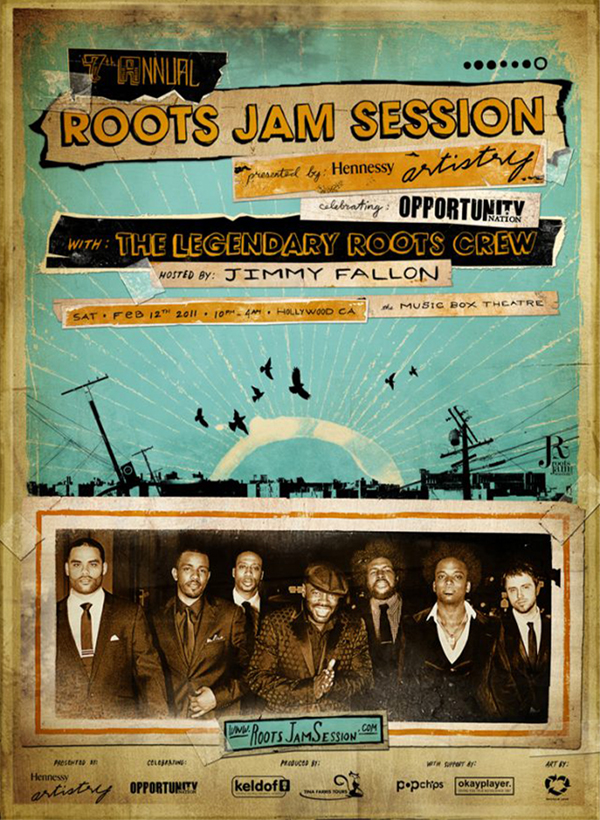 Keldof and The Legendary Roots Crew would collaborate to create THE ROOTS JAM SESSION: an all-night, invite-only experience where the best in music (from world-famous Rock Stars to top Hip Hop and R&B acts) could take the stage — without any rehearsal — and jam with the group Rolling Stone called “one of the 20 greatest live acts in the world.”

The twist? The night would feature a unique social-action agenda, providing an opportunity for A-List celebrities to move beyond the self-congratulatory stuffiness of awards season in order to create a true impact. A once-in-a-lifetime experience that would inspire actionable change alongside an unforgettable night of ground-breaking, musical mash-ups. A night where anything could happen.

Keldof would not only produce the annual Jam, but also set the social-impact agenda each year, partnering with top organizations dedicated to positive global change. And while celebrating this extraordinary roster of talent, the captive audience of powerful influencers would participate in a covert awareness campaign for some of the biggest issues affecting our world, empowering attendees to become walking/talking billboards for the cause at the center of each year’s jam. 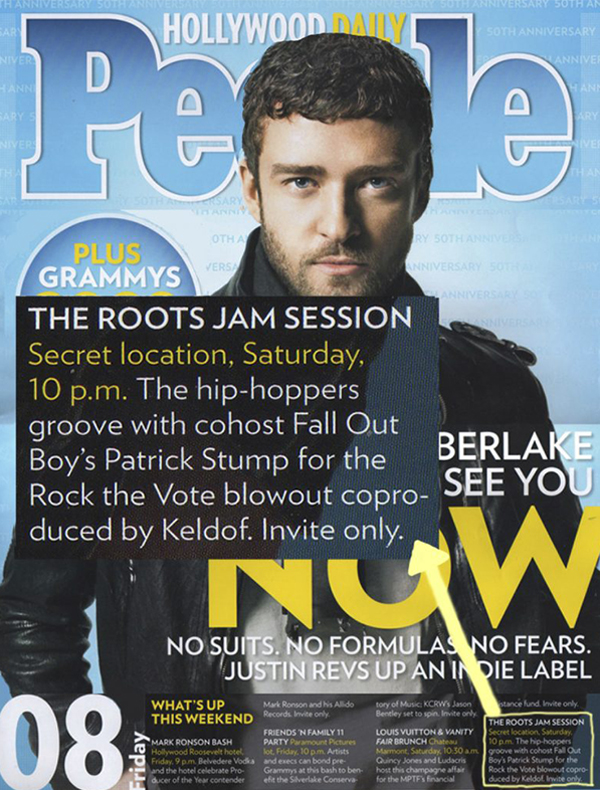 As one of the most anticipated experiences of the year, The Roots Jam Session has become an industry staple for over a decade. Occurring during the week leading up to the Grammys, it has not only gained the attention of mainstream media from The Washington Post and Elle to Rolling Stone and People Magazine, but also become the go-to event for talent from Beyonce and Jay Z to Nick Jonas, John Legend, JLo, Ed Sheeran, Tom Cruise, Bill Maher, Snoop, Matisyahu, Sara Bareilles, Chaka Kahn, Jada Pinkett-Smith, Elizabeth Banks, Spike Lee, Drew Barrymore, Slash, Dave Chappelle, Taraji P. Henson, Jimmy Fallon and countless others.

Through the years the night has also become a launching pad for new talent, as well as a musical think tank for future collaborations – including an original song called BIRTHDAY GIRL by The Roots and Fall Out Boy (commemorating Rock the Vote’s 18th birthday) and the Grammy Award-Winning “WAKE UP” album from The Roots and John Legend. Ultimately, the event transformed the underground hip hop sensation into a household name, providing the legitimacy needed to join Jimmy Fallon as the house-band on his Late Night NBC talk show… and eventually morphing into a regular gig on The Tonight Show. 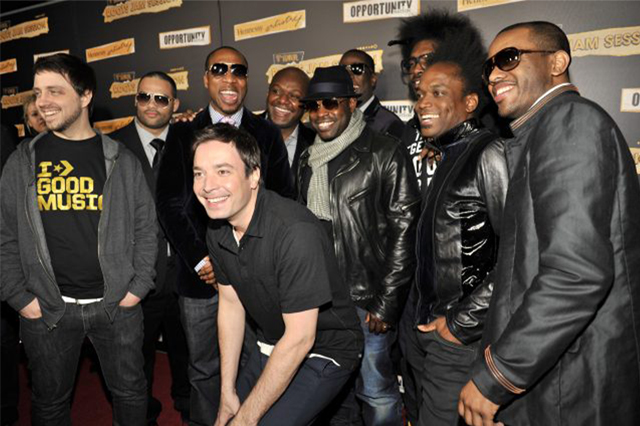 However, most importantly, the evening utilizes the power of its high-profile attendees & performers to launch annual social impact campaigns. From creating each Jam’s unique brand identity and corresponding action items to overseeing all branded-partnership activations and customized marketing & advertising strategies, the Keldof team has worked to ensure the evening educates and inspires as much as it entertains. SO, while the magic is happening on stage, the interwoven themes of social awareness guarantee that the impact of the night reaches far beyond the venue.

LET UR (blank) BE HEARD

An empowerment campaign utilizing contests run in collaboration with local radio partners, a Sunset Blvd billboard, and custom touch screens throughout the streets of Hollywood — resulting in the registration of over 250k new voters.

Attendees and fans without inside access had the opportunity to access touch screens along Sunset Blvd, allowing them to register to vote and voice opinions on the issues that affect them most. 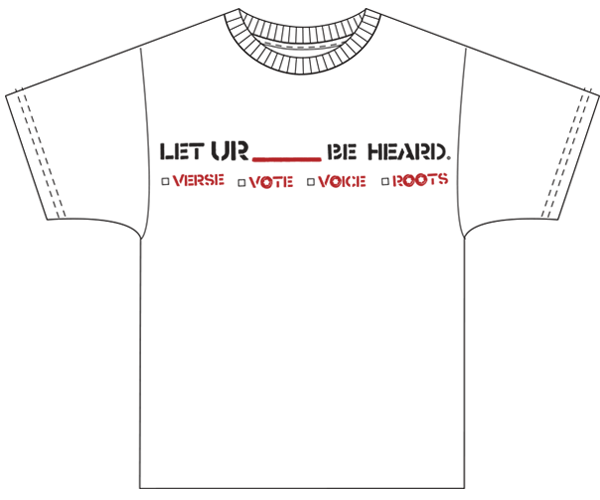 An awareness program launching a large-scale, environmental-focused coalition of musicians — from The Roots and Dave Matthews Band to Maroon 5.

The initiative, in collaboration with REVERB, sparked widespread environmental change within the music industry: encouraging mega-stars to commit to "greening" their tours, creating custom programs that support their environmental and social goals – all while engaging millions of fans to take action for their planet. 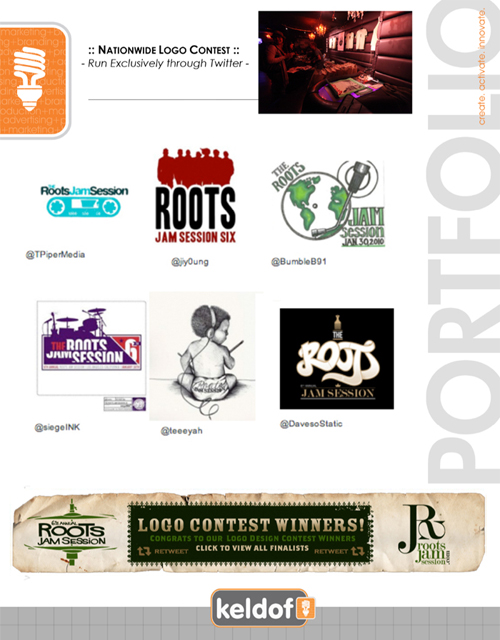 The Renewal campaign also hosted a 1st of its kind national logo contest run exclusively through social media & then screen-printed winning logos on old clothing to give them new life.
FEED YOUR ROOTS

An environmental campaign created to educate and integrate composting into schools across the nation.

By following simple guidelines to launch their own composting programs and designing posters in celebration of the campaign, students were given the opportunity to win specially designed compost bins, signed by high-profile Jam attendees.

A Human Rights initiative sparking a national conversation about genocide in a then-unknown region of Sudan called DARFUR.

Utilizing the power of high-profile industry tastemakers from co-host Don Cheadle to attendees like Beyonce, Bill Maher, Spike Lee, and Jay-Z, the night created global awareness for the devastating situation in Darfur, while launching a wide-spread postcard campaign urging the government to take action, and proving the theme of the night that “EVERYman can indeed make a difference.”